When it comes to building a mobile app, the business owners often get into a perplexing situation regarding which type of app development would be the best for their business? Is it iOS or Android development? No doubt, Android is the most popular operating system and Google Play Store has more than 2.87 million apps – the biggest number amongst all available app stores of different operating systems. Whereas, App Store is second on that list with a total of 1.96 million apps. Now, selecting mobile application development on the basis of the popularity of operating systems might not be a great decision for any business. It is always recommended to first know all your business requirements and objectives. Thereafter, comes the part when you should compare both iOS and android app development keeping the requirements and objectives into consideration.

But, if you are someone who is entirely unaware of the mobile app development industry, then certainly you need some help.  And we are here to back you. In this post, we will let you know about the differences between iOS and android app development on different bases so that you can select the right app development for your project.

The proprietary Xcode tool is the expertise of an iOS app developer. This tool is backed by Apple, and hence, comes with different bug fixing tools. Besides, it supports a whole range of iOS devices. Whereas, the android app developer relies on Eclipse which is a third-party integrated development environment. Besides, there is also Google’s Android Studio which also serves as the integrated development environment for the Android operating system.

As mentioned above, iOS apps are easy to develop as compared to Android applications. Hence, when it comes to complexity, android is way behind than iOS. It is because there is a lot of device fragmentation in the case of android app development. On the other hand, Apple has a limited range of devices, and hence, there is always a small range of screen to target when it comes to mobile app development. In addition, in the case of android app development, a developer has to use a number of simulators in order to test the app to check whether or not it is properly displayed for devices of every screen size.

In case you don’t know, the prime difference between android and iOS app development basically lies in architecture organization and navigation. When it comes to android app development, apps are developed using a partition. This means the coding team of your hired mobile app development company will break down the app into activities and fragments. Here activity refers to one app screen. In a scenario where a developer is working on a project with multiple screens, he/she have to manage a number of activities. Now, each of the activities includes fragments that are known as the sections of the user interface that facilitate navigation between activities, open a new app screen, and entering a value. 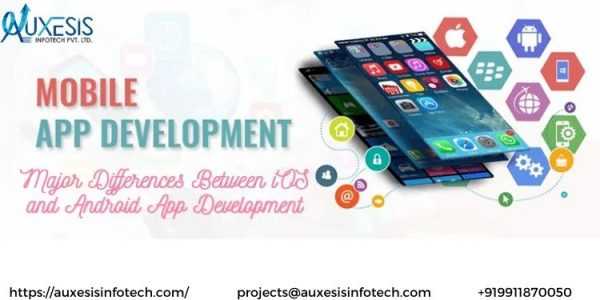